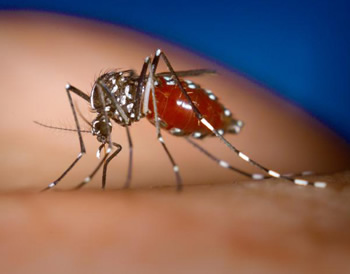 Chatham County Mosquito Control was organized in 1957 based on an approach called integrated mosquito management (IMM). There are 40 mosquito species in the county and the control methods for each may be different.  Surveillance is essential for successful implementation of all control strategies.  Our IMM approach incorporates physical, biological, and chemical controls.  Balancing their application, rather than depending upon a single control strategy obtains maximum effectiveness with the least environmental impact.

Surveillance
Chatham County uses an integrated pest management approach to mosquito control and obviously, surveillance is essential. Forty species of mosquitoes are known to occur in the county, of which only eleven are important nuisance species or disease vectors. Culiseta melanura (Coquillett) and Culex quinquefasciatus Say are the only two species from which we have isolated Eastern Equine Encephalitis virus (EEEv) and West Nile virus (WNv), respectively. Surveillance begins in our front office, where calls from our residents are individually plotted on a county map using different colored pins for each day of the working week. This map is used to locate trouble spots, as indicated by a cluster of pins. After a significant rain event, our staff's direct field observations corroborate the telephone requests for service, and there is little need to inspect each residence. However, during drier periods, staff members investigate many of the calls, suspecting artificial container species or other isolated situations that create a localized problem. The map is then used to plan both ground and aerial adult control missions.

The staff locates and monitors mosquito-breeding sites for immature mosquitoes.  Mosquito traps, reports from residents, and human landing rates are used to monitor adult mosquito populations.  A sentinel chicken flock is used to detect the presence of the mosquito-borne disease, Eastern Equine Encephalitis (EEE). In addition to the sentinel chicken flock, other adult mosquito traps are deployed on a weekly basis to monitor populations of mosquitoes involved in the transmission of Eastern Equine Encephalitis virus (EEEv) and West Nile virus (WNv).

Physical control, sometimes referred to as Source Reduction, is a critical component of an Integrated Mosquito Management plan.  This control measure can be as simple as turning over a bucket or as involved as using heavy equipment to construct a network of drainage ditches.  This goal is simple, to eliminate or reduce the number, size and frequency of mosquito breeding sites.  Chatham County Mosquito Control has employed physical control quite successfully.  Ditching projects completed as far back as the early 1960’s are still providing tremendous benefits to the citizens of Chatham County.  The department currently has 2 amphibious excavators that are used for physical control activities.

With the discovery of the local populations of the Asian Tiger mosquito, Aedes albopictus, in 1986 and the subsequent spread of this mosquito throughout the county, the need for physical control took on  new importance.  The Tiger mosquito prefers to lay its eggs in artificial containers, usually in close proximity to human habitation.  The most effective means of controlling the Tiger mosquito is by eliminating the standing water these mosquito need to complete their life cycle.  If a container holds water for more than 5 days in a row, it can produce adult mosquitoes.

The primary biological control we use is the mosquitofish, Gambusia affinis. The mosquitofish preys on mosquito larvae allowing us to keep mosquito populations under control.  When introduced into a mosquito breeding source, the mosquitofish quickly adapts, multiplies and controls mosquitoes in a given area. 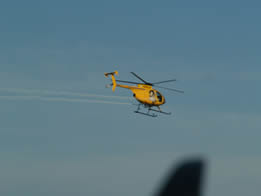 Chemical control involves the use of EPA approved chemicals designed specifically for control of immature and adult mosquitoes.

Larviciding is the application of pesticide to water for control of immature mosquitoes.  Altosid®, an insect growth regulator (IGR), Golden Bear® Mosquito Larvicide, a refined mineral oil, and Agnique®, a monomolecular film are used for this purpose.  All three products are classified as unrestricted pesticides by the EPA, and are registered for application in environmentally sensitive areas.  The IGR blocks development of the mosquitoes to the adult stage.  The oil and monomolecular film impair breathing until the mosquitoes die from a lack of oxygen.  These products can be applied either by hand, with ground-based equipment or aerially. 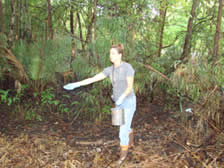 Employees applying insecticides are licensed by the GDOA or work under the supervision of licensed technical staff.  Licensed staff are required by State Law to participate in an on-going education program.  All application equipment is regularly calibrated to insure that correct amounts of pesticide are delivered.  Appropriate records of all operations are maintained.