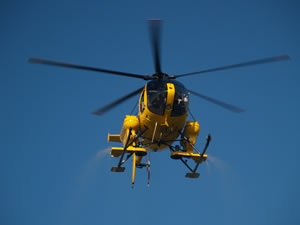 We also operate four helicopters, two MD 500E helicopters and two MD 520N. Both models have identical airframes and external attachment points allowing all helicopter equipment to be mounted on either aircraft. For larviciding, we use Isolair broadcast spreaders that have been modified to disperse the Altosand formulation. The spreaders hold about 400 pounds of material each, and are filled from a specially designed trailer. The trailer has two compartments. The smaller rear compartment is outfitted with 2 screw augers that form a “V” in the rear of the trailer. The aircraft taxies into the “V” for filling. The screw augers bring up the Altosand formulation and release it into flexible 4-inch tubes placed into the Isolair Spreader tanks. 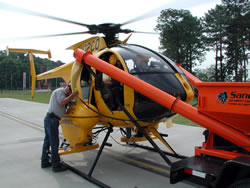 During the past several years, a number of high pressure liquid adulticiding sprayers have been designed and built by our aviation staff. These are used to conduct adult mosquito control with our MD 500E helicopters.

Currently we are using naled in the emulsifiable formulation marketed as Trumpet® for adulticiding missions and Altosid ® Liquid Larvicide Concentrate mixed with sand for larviciding missions. All of our aircraft use Ag-Nav GPS systems and have data logging capability. Mission records are downloaded, superimposed over digital maps of the treatment area, and printed to create a permanent record of the operations. These records demonstrate that we do not spray over schools, hospitals and groups gathered for outdoor events.